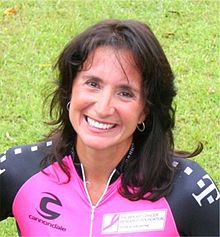 At BenditCycling, we have been in awe of the courage of this determined woman and her dedication to the cause she has devoted her life to. Founder of the organization, 3000 Miles to a Cure at https://sites.google.com/site/3000toacure/  she is working to collect funds for finding a cure for brain cancer. In our blogs, we have talked about Maria Parker before, but we would like to tell you about the exemplary courage and faith she displayed at the Race Across America (RAAM) event, a 3000 mile race across the continent of America.

Maria Parker began her race at Oceanside, California accompanied by three crews that included family members and friends who took turns caring for her and supporting her through her arduous journey. The first stages of her race took her through the “Glass Elevator” into the blinding heat of the desert and lasted for 24 hours until Congress, Arizona. When she reached Prescott and Flagstaff, she had to take a break from the race because she contracted severe digestive problems. This condition not only weakened her but prevented her from taking in the calories that are so vital to maintain energy levels.

Recovering a little from this bout, she pushed on until a major disaster struck in the form of an accident at Tuba City. The support vehicle behind Maria carrying supplies and spare bikes was totalled by the negligence of a motorist more focused on her phone. Her crew in the vehicle was hurt badly and had to return home except for her son, Will. Any other person might have given up but not Maria. She decided she wasn’t going to let this setback pull her out of the race. After informing the RAAM authorities and with the firm belief that the Navajo gods were on her side, she took up the race from where she had left off.

It was already the fourth day into the race and Maria was now riding last but she was as determined to finish because for her this event meant awareness for her cause more than anything else. The totalled vehicle had been carrying additional equipment such as gears and wheels that Maria would need to ride over mountainous trails. But her industrious crew managed to find her the necessary gear at Durango and Maria was all set to deal with the Rockies.

The next setback occurred when she was almost out of the Rockies, in the form of breathing problems that had probably been brought on by the dust she had been inhaling all these days. Medicines and inhalers helped and soon Maria made it through Colorado. It now seemed like nature was trying to help because she met some cool mist that relaxed her breathing and she was able to cover a lot of the time she had lost. She was even overtaking other riders.

To truly understand what it takes to do what Maria did, you have to understand bike racing. Complete exhaustion, serious lack of sleep and battering elements are only some of the battles bikers fight. Add to that is the concentration they need to maintain because the roads are not always smooth and traffic conditions can be difficult.

Events like these take a toll on you, emotionally, physically and mentally. But Maria had the support of her family and friends who were constantly beside her and her many fans who sent her encouraging messages buoying up her spirits so she became the first woman over 50 to win the race in the women’s category.

Maria Parker, we at www.benditcycling.com salute your spirit. And we salute you!!